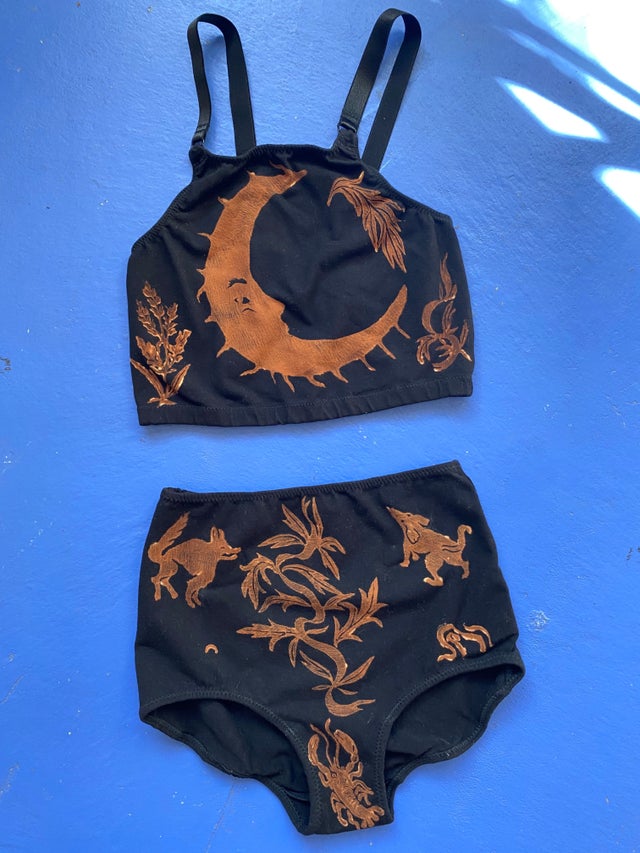 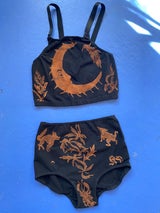 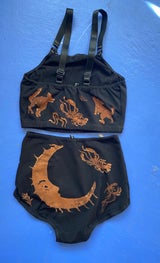 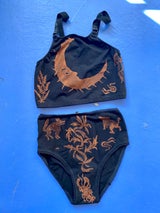 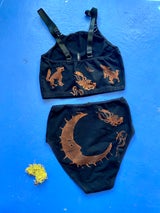 (sold out) Mugwort and the Moon Sample Sets

MODEL SETS- WORN ONCE AND WASHED.

Mugwort & The Moon is one of our most beloved creations. This Batch will feature new imagery based on THE MOON tarot card, with new Mugwort carved imagery.

Mugwort is a sacred plant medicine who brings us into contact with the otherworld. Mugwort presents a portal wherein we are invited to perceive messages from the spirit realm, connection to our ancestors, gallivant with our shadow selves, and peer into the twinkling depths of the unseen. Mugwort has a special affinity to the pelvic region and has long been known as an ally to the waters of our bodies: a protective and magical companion as well as an aid in issues related to fluid such as water retention and painful menses. Accompanied by the pearly ever-changing wisdom of the Moon, this brief and bralette ritual garment set recognizes the void as a space of transformation and non-duality.

Here in the void, Mugwort is our ally. Associated with water and the Moon, Mugwort's leaves with their little hooked tongues whisper possibilities and alternate routes. Mugwort loves to grow in hedges, dividing water from path, marking liminal space, existing with their roots in multiple realms at once. Mugwort helps us release into a new flow, revealing untread paths and clouded spots in our vision.

A third way, a third being, the sacred trinity, the "other". The lobster in the card has many meanings- a being on land, emerging from the depths (representing the subconscious), evolution, non-duality, Both/And...

The Lobster is that unexpected thing behind us: is it a miracle? A something we never could have predicted. To me, the Lobster is a glimmer of hope: the sanctity of a laugh cutting through sorrow. A reminder that there is always the possibility of something entirely else about to happen.

There, in the moment before transformation, many things await, some familiar, some bizarre, all resting on a precipice of change. In the primordial ooze of twilight, we pause, just before pressing through to Something Else. There is always a maybe: suspending the notion that you have the ability to predict all things, potentialities are expanded.

Made from soft and supportive black Organic cotton, and finished with satin plush straps. Each garment is patterned, cut, sewn, and printed with hand carved blocks by Serpent & Bow, with care and purpose throughout each step of construction.

Organic cotton is grown and made in the USA.

Sold Out
Add to Cart